Indian expat has been living in UAE for 15 years and has been purchasing Big Ticket raffle entries for 2 years.

An Indian expat won the top prize in the Big Ticket Raffle in Abu Dhabi. Mr. Mohammed Kunhi Mayyala won 7 Million Dirhams in the SUPER 7 MILLION SERIES 196 of the raffle. He had the winning ticket number 121013.

In a post the official Big Ticket Abu Dhabi FB page, we have learned that Mohammed has been living in Abu Dhabi for 15 years. He purchased the ticket for himself and after 2 years, he won the jackpot this time.

Mohammed was surprised and initially couldn’t believe that he won. He even thought it was a fake and prank call, but her later realized that he got the grand prize and called it his lucky day. He plans to build his own house and set up a business with the prize money. He also plans to help those in need.

Mohammed thanks Big Ticket for this win and encourages other customers of Big Ticket to keep trying. 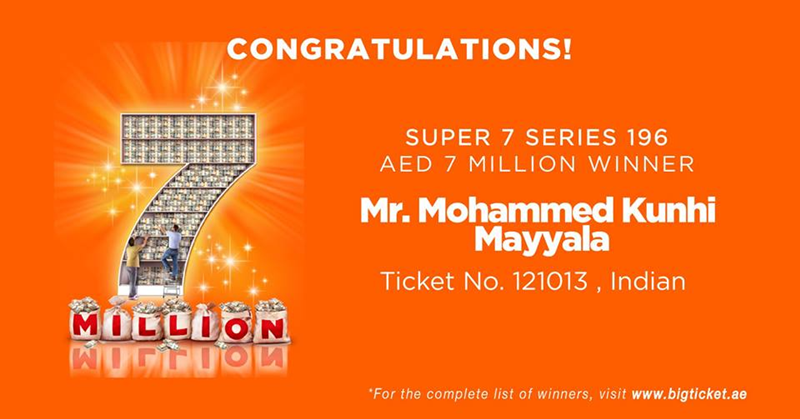 How to Live Like a Local in Dubai, UAE

Salman Khan to Shoot Scenes in Abu Dhabi for…

Applying for a Health Insurance in the UAE

Aside from the grand prize, there were 7 others who in this draw, with each of them winning 100,000 AED each. Four are also Indian, 2 Pakistani, and 1 Kenyan. Below is the complete list of winners for this Big Ticket series:

There are many Indian expats in the UAE so it’s no wonder that plenty of NRI’s have the opportunity to win prizes such as this. But it is always a nice news to learn about winners getting prizes that can help them with their lives. After all, we are here in the United Arab Emirates to make money so this type of reward is surely a great and happy moment.

For those of you who would like to join this regular raffle, you can do so by visiting https://bigticket.ae/

How to Check if you have a Financial Case in Dubai